Why challenger brands cut through

Any brand that doesn’t occupy the top spot in its sector could conceivably be described as a challenger; but that’s only part of the story. Challenger thinking is a well-established marketing concept, pioneered by brands like Pepsi and Virgin, and now adopted by thousands of marketers and brands around the world.

Being a successful challenger encompasses a mind-set and a number of behaviours. It means being able to clearly articulate exactly who you are and what you stand for, with confidence that this comes from your purpose and values, not what market norms dictate.

Practically, being a challenger means having an ambition to reach further and grow faster than your existing marketing resources would conventionally allow.

Hence, it’s about being prepared to attain success through inventive means; bending, often breaking the established marketing rules of a sector, and ensuring that different thinking and creative approaches are applied across all channels.

Being a challenger isn’t about being noticed and accepted, it’s about demanding customers’ attention and being impossible to ignore. Ultimately, in today’s cluttered marketing landscape, this translates to a focused objective of gaining cut-through.

True challenger brands need to approach their marketing with the fresh thinking of someone who’s never worked in the sector before.

When we helped launch Freederm in 2005, the youth skincare sector was dominated by heritage brands like Clearasil, Clean & Clear, Neutrogena and Oxy. It was a sector where marketing concentrated on the medical properties of your product, killing germs, cleaning pores, fighting acne.

We turned our backs on this from the start; Freederm focussed instead on the confidence and freedom its users associated with having clear skin.

We have pursued this agenda through irreverent, entertaining and engaging content across multiple channels; and today Freederm has one of the highest brand recognition scores in the skincare category.

As a new entrant to the market, Freederm was able to buck the establishment rules- something that can be more difficult for established firms to do, as it requires them to relinquish their existing brand equity.

An emotional point of difference

The ‘rules’ and comms themes of this market had become so uniform, consumers were hard pressed to tell one brand from another – so they chose on price, assuming all the companies were the same.

Our key challenge was not only to stand out from the crowd, but to justify a premium – to effectively put more bums on seats by making people care which seat their bum was on.

We had to reconnect with people by breaking the market rules and engaging with consumers emotionally. By reminding consumers what motivated them to book holidays in the first place, capturing aspirations, nostalgic desires and curiosity for new places, we were able to raise Brittany Ferries above the ‘closest and cheapest’ criteria the market had backed itself into.

Richard Branson’s airline is well known for its challenger spirit. So when our PR team helped Virgin Atlantic Airways (VAA) launch its new domestic ‘Little Red’ service in the UK last year, we were plunged into a campaign that brought the Virgin brand challenger DNA into sharp focus.

In the run up to the inaugural VAA Little Red flight, we achieved blanket international news coverage with an April Fools story about a new glass-bottomed plane.

This fictitious aircraft would be used on the London to Edinburgh route, allowing passengers to try and spot the Loch Ness monster. The story achieved mass coverage, and was still in the news a week later.

When Richard Branson disembarked from the first Little Red plane to land in Edinburgh wearing a specially-designed tartan kilt, we arranged for him to answer a key question, ‘what does Sir Richard Branson wear under his kilt?’

The answer? A pair of white boxers, emblazoned with a message, ‘Stiff Competition’; hammering home the message and creating one of the most shared images of 2013 which is still being used now, 18 months later. Focus on being brilliant

Being a challenger isn’t necessarily about being small; it’s about being bold enough to be different, and single-minded about what you want to achieve.

Bray Leino understands what it is to be a challenger. Founded in the South West, far away from the London advertising village, has meant we’ve had plenty of practice in doing things differently.

To talk to someone about how we can make your challenger aspirations a reality, email Austen Donnellan. 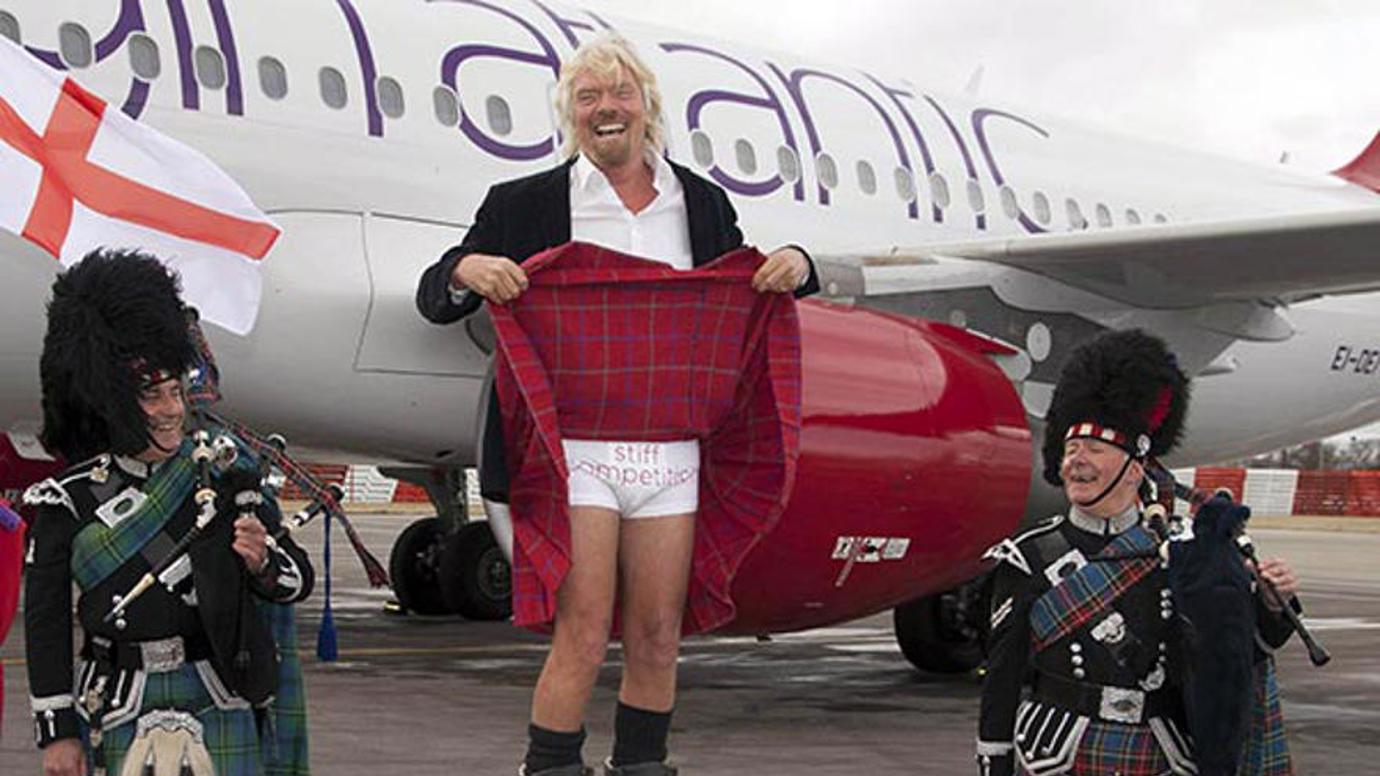